Home
About Us
Meet the owner

Darren Purcell has been painting since he was 17 years old. He completed his apprenticeship at the former State Electricity Commission of Victoria. Upon completion of his apprenticeship he stayed on as a tradesman and expanded his knowledge from Industrial/Commercial work through to Residential work with time spent in the sign writing department as well.
Like any good paint job, it’s all about the preparation… Darren was fortunate enough to be trained the “old school” way in an environment, where it wasn’t about how quickly and profitable you could make a job, but rather about being shown the correct techniques to complete a quality job that would last well beyond expectancy.
As an apprentice, Darren competed in the Painting & Decorating section of “The Work skill Olympics” as part of his training. He gained a silver medal and several other awards during his time as an apprentice. Darren is always keen to impart his knowledge and skills onto those joining the Purcell Painting Team.
Since 1997 Darren has been slowly building a business and forming a team of professional painters to service the Greater Gippsland area and beyond. 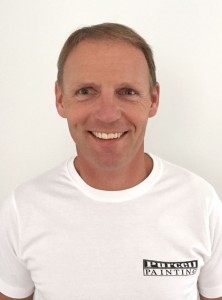